Prelude
I’d driven up Vancouver Island to Port Hardy the evening before my 7AM ferry to Bella Bella departed, and car camped a few miles from the ferry terminal. As I sat in camp about 8:30, I realized with horror that I’d left the bag with all my alcohol at home. No, not that alcohol — the fuel for my stove! So I raced into Port Hardy. Just before they closed, I scurried into the pharmacy section of the local grocery store, and cleaned them out of their rubbing alcohol. As he rang up my eight bottles, the clerk eyed me with a mixture of pity and contempt. I decided any explanation would sound like protesting too much, so I rolled with it. Back at camp, the test burn in the stove went well: a little sootier than proper meths, but plenty hot.

July 13th
With the snakes-and-ladders logistics of getting up at an ungodly hour to break camp, dropping my kayak and gear at the ferry terminal, driving the car to long-term parking, and catching the bus back to the terminal, I didn’t get a whole lot of sleep.

After breakfast on the ferry, I paid a few bucks to use the onboard shower, then found an unoccupied bench and napped for a couple of hours. As I slept, the mist and rain burnt off, so by the time we landed at Bella Bella around 13:30 hours it was beautifully sunny. 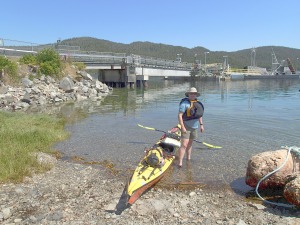 I’d been concerned about solo launching on the rock-barricaded beach at Bella Bella, which was one of the reasons I’d picked this date and time — a high spring tide that would reach well up the beach and cover any boulders. This worked beautifully: I was able to wheel the kayak right into the water. But I was to pay for my cleverness later.

At first I made good progress south down Lama Passage. But as I rounded German Point, the wind came strong from the south-west. The GPS suggested I’d spend 3+ hours battling headwinds to get to Dodwell Island, the nearest campsite in that direction that I knew of, which would take at least until 20:00hrs. And that assumed no rest breaks or slowing of my current pace. Unrealistic assumptions, both. Which put me potentially paddling in the dark to an unfamiliar landing. So I came about, put up the sail and ran before the wind to a little lagoon tucked in behind Walker Island on the far side of the channel, landing just before 17:00 hours. An early night seemed like a good way to get into a pattern of early rising and early on the water. 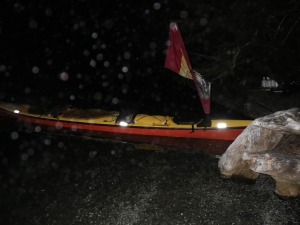 As I got up to pee about 2AM, I discovered the sea lapping at the foot of my tent — the downside of the high spring tide that had benefited me earlier. I hastily dragged the tent up the unsleepably steep section of the little valley I’d camped in. Fortunately, I always secure my kayak with a line to a tree or other immovable object, so the only casualty was one of my paddling sandals, borne away by the thieving sea. Good thing I also had neoprene slippers for my drysuit that could be worn on bare feet too.

I got back to bed about 3AM, but the rush of the draining tidal creek allowed little sleep. Still, that meant getting up and launching for 7:30AM was no problem. I paddled through heavy fog on a compass/GPS course. The air was calm, but the water was lively, with tidal currents whirling driftwood swiftly around. When I saw one log a few hundred feet in front of me apparently being swept from far off my starboard bow to far off my port bow in a few seconds, I thought there must be an extraordinarily fast current ahead. But the sudden, huge change of my compass and GPS headings clued me in: it was actually my bow being swung from left to right. Amazing the tricks fog plays on you when you have no visual references. It doesn’t surprise me that sailors report sea monsters and mermaids.

By the time I’d landed and filled my water bags, the fog had burnt off. As I approached Sans Peur passage, the current was turning against me. I’d wanted to explore the temping looking channels winding through the McNaughton Group, but it was work just making progress in the comparatively wide passage. In the narrower, shallower jet nozzles of the archipelago, it would have been like trying to paddle up whitewater rivers.
With the tide low, the passage walls were festooned with plumerose anemones buttoned-up against dehydration and drooping like three-day old party balloons. Or worse.

Around 14:20 I landed at a beautiful sheltered cove about a mile northeast of Superstition Point. I had my pick of several tent pads, all at least ten feet up the embankment at the back of the beach, safe from anything short of a tsunami.

About 20 minutes after I’d landed, I was joined by Becky, another solo paddler. She’d come from Triquet Island, my next intended destination.

As we ate supper together, I was proud of how well my home cooked, home-dehydrated Moroccan Chicken had turned out. Becky inadvertently one-upped me with her meal, which was not only home cooked and home dried, but made from home-grown organic vegetables. D’oh!

July 15th
Peered out of the tent at 5AM. Visibility only a couple of hundred feet in the mist, with the mast light of an anchored yacht looming like a street lamp on a Vancouver winter day. Not what I wanted for rounding the exposed outside of Superstition Point. It looked to me like by the time it burned off, the 25-knot northwest winds the VHF was calling for would have arrived. Again, not what I wanted for paddling on the outside. I rolled over and went back to sleep.

Later, as I fried up my breakfast of hash browns and freeze-dried heuvos rancheros, three additional paddlers arrived safely from Triquet Island. Oh well. I was camped in a beautiful bay. And besides, an idea had been percolating at the back of my brain. My original plan had been to paddle from Bella Bella back to Port Hardy. But over the last couple of days, I’d been reminded of the times I’d paddled in this general area years before. And how rich and beautiful it was. Blasting through it was beginning to seem like a real waste. Better to linger, explore and savour the beauty at leisure.

I set off in early afternoon to rewater in the bay ’round the corner and try my hand at fishing. I’d promised to share any bounty with the three Americans in return for one of them doing the filleting.

I spent a pleasant couple of hours rocking in the sun, dropping my line off swell-washed points north of the camp. Sadly, I caught nothing but a series of undersized rockfish. As I worked to release the last one, one of his spiny quills stabbed my index finger. It began to throb so intensely I tried to remember whether rockfish harbour some kind of neurotoxin. Fortunately, after a bit, it subsided, so it was clearly just a mild physical trauma — no worse than having a sewing awl hammered through my fingertip.

Back at camp, I discovered my American site mates had been gifted by a passing fisherman with a lovely salmon and fresh veggies. Fishing and farming the easy, bloodless way! In light of my earlier offer to share with them, they happily shared with me.

While updating my journal as I waited for supper, I had one of those perfect, near-mystical moments I travel for: watching a tern scurry along the water’s edge, I fell into a reverie about how evolution sculpted the aerodynamics of the body, the length of the legs and the shape of the beak.

July 16th
After a rest day and an early night, I woke painlessly at 4:30, a quarter hour before my alarm was set. But even as I packed, I was wavering a bit a bit about heading out through the sheltering gap around the corner from the bay. Low clouds were already flying by southbound, and with no real outer coast paddling under my belt yet on this trip, I was having to work to summon up what Napoleon famously called “the courage of the early morning.”

Still, with the help of the Americans, launching was easy. So I told myself I could just poke my nose out through the gap, and beat a retreat if it was too sketchy. At first, I thought I would have to do just that. The waves were sweeping in from multiple directions and interacting chaotically. But as I pulled clear of the gap, which had been squeezing and rebounding the seas, things settled down to a low, predictable swell from the northwest. I made sure to get well west of Superstition Point and any outlying reefs before putting up my sail and coming about for the northeast end of Spider Island. It was glorious: the wind bid fair for my destination, and the early morning light painted the sea a rich, deep blue that ran unbounded to the western horizon.

As it turned out, I was able to sail all the way to Triquet Island, threading my way through the channel on the east side of Spider and then the archipelago south of it. 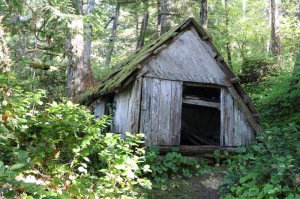 After exploring the campsite at the northeast end of Triquet, I opted to return to the one at the northwest end  ̶  the beach there was sandy rather than muddy, and the tent sites were safely in the upland. Though the cabin Randy Washburne built here in 1977 is much decayed, and now houses mainly mould, moss and mice. You’d have to be pretty desperate to seek shelter in it now.

As I landed, I chatted with Gerald, a solo paddler camped there, who was outbound for a daytrip. Temporarily in sole possession of the beach, I spent a happy half hour simply contemplating the beauty of the little bay and the islets with their wind sculpted trees, like scaled-up bonsai.

When I eventually emerged from my trance, I made toasted cheese sandwiches for lunch and fell on them in shameless, gluttonous ecstasy.

Once camp was made, I rigged my hammock (it was really nice to use it other than for emergency camping). With the sun turning the water in the little bay turquoise, it felt positively tropical to be swaying gently under the trees as a warm breeze wafted over me.

Gerald returned a bit after 15:00 and proved to be a great site mate and conversationalist. He was also an accomplished white water paddler, and his description of his near-death experience in the seas at the south-west end of Calvert Island was harrowing. He’d turned back. I’d been torn about going down the outside of Calvert. This seemed like a clear sign that I shouldn’t.

One of the many the great things about solo travel is the ability to change your plans without needing to achieve consensus or worrying that you’re ruining some else’s trip. It was at this point I decided definitely that instead of rushing through to Port Hardy I’d do a wending loop and return to Bella Bella. It was a very liberating decision.

I fell asleep to memories of that perfect sail from Superstition Point to my present camp. After a couple of hours, I woke up shivering, with my arms and chest in spasm. The temperature had dropped and the wind had risen. Fortunately, the solution was simple: take my sleeping bag, which had been only draped over me, and zip it around my body in full mummy mode. Now warm and cozy, I dropped off again, lulled by the howl of the wind in the trees and the boom of surf on the islets across from my little bay.

Part 2 of this trip report is here.