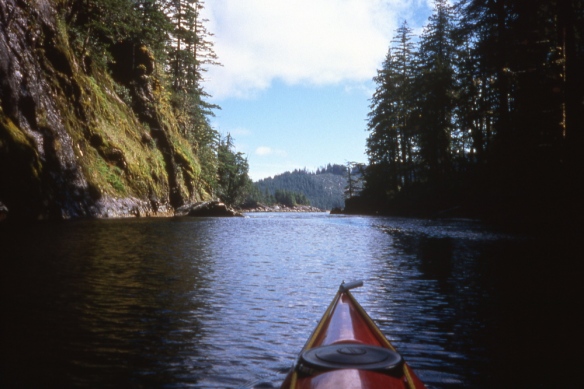 When the weather and my sickness lift, I return to the entrance of Johnson Lagoon. This time, I have scheduled my approach better: like the gate of a fairytale kingdom that opens to only a few, the current admits me. Not wanting to have to wait half a day for the next slack, I leave the lagoon less than two hours later. Already the current is coursing in a strong ebb. It’s with me, but this is a mixed blessing. While I don’t have to fight against it, it also means there is no retreat once I’ve neared the mouth of the lagoon. The virtues of a kayak optimized for touring—its length, straight line speed, and resistance to turning—are liabilities in what is effectively a whitewater river. It’s like doing a downhill slalom on cross-country skis. After a couple of heart-racing minutes, I am flushed out onto the open sea, very glad not to have left my departure any later.

The O’Leary Islets tower out of the sea like Tolkien castles. Constantly scoured by wind and wave, they support no trees or bushes, only great colonies of sea lions. These huge cousins of seals crowd for space on the available ledges, all lowing like cows on steroids. Rising above the lot is the bull of each group. Largest and most aggressive of the males, he claims his ever-shifting place in the sun by unceremoniously shouldering all and sundry out of his way. The result is a steady shower of evicted pinnipeds plunging into the water around the rocks, like repelled besiegers hurled off the ramparts and into the moat. Not at all put out, they scramble back onto the ledges, so that every inch of level surface is continually carpeted with writhing, bellowing mammal. (Earlier this summer, I’d heard about an Alaskan kayaker getting unwisely close to a cliffside rookery. He was fatally accordioned into his cockpit by a belly-flopping sea lion who didn’t look before he dived. A traumatic surprise for both parties to be sure, but I expect the kayaker was the more broken up about it.) 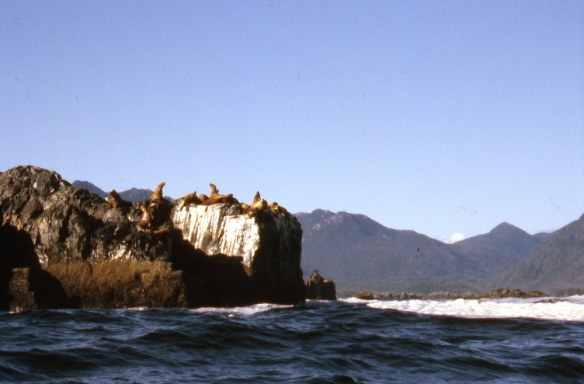 As I circle the islets taking photos, an oversized trough suddenly sucks away all the water beneath me, and deposits my boat on the fulcrum of an undersea rock. The landing is gentle, and enough water remains that I do not capsize. But the message is clear: Pay attention, boyo. These elements could snap your loaded boat like a matchstick. 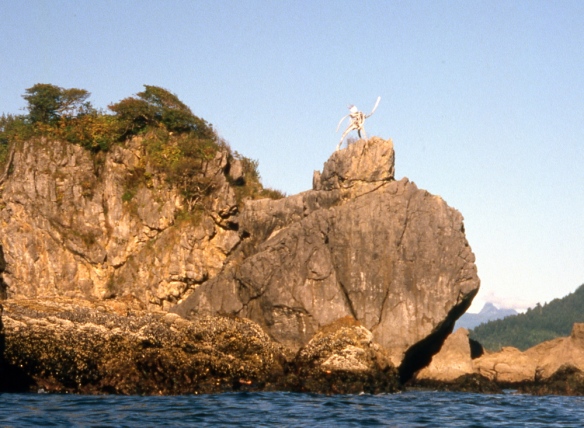 Art is where you find it. Some creative type sculpted this from driftwood.

Coming across a sea otter napping peacefully on the surface, fronds of bull kelp clutched in his paws across his chest to anchor him in the swells, I feel a kinship. Years ago, when I first started paddling in the Pacific, and encountered kelp miles from shore, in water I knew to be more than 20 fathoms deep, I found them quite sinister, imagining them as the tentacles of some submarine monster determined to seize my boat and drag it into the depths. Since then, I have learned to seek shelter in patches of bull kelp when no landing is possible, draping the fronds over the deck while I eat or drink. Like oil on troubled waters, large patches of kelp dampen breaking waves into gentle swells, acting as lay-bys on the ocean highways.

Surprisingly, kayakers can disturb sea otters more than power boaters do, since our quiet travel allows us to sneak up on them, whether by accident or design. So like a fond parent tiptoeing away from a sleeping child, I back paddle silently off.

The swells rise as I return to the Bunsby Islands. Though I know intellectually that even huge swells are not as dangerous as smaller breaking waves, there is still something quite daunting about finding myself alternately in valleys of water so deep I cannot see land, and perched atop eight foot moving hills of water.

As the narrowing rock walls funnel them into large breakers, the swells make the channel closest to my destination impassable. Paddling further south, I spend long minutes studying the gap between the far end of the island and its neighbour. The thundering seas fill my head with images of my boat being dashed against the rugged cliffs. The water is chaotic with clapotis, as incoming swells rebound off the cliffs, so that waves come from both left and right, sometimes simultaneously.

After a few moments, while my heart continues to race, the fear is tempered with a kind of hyper alertness. I become vividly aware of every element in the scene around me, attuned to every nuance in the turbulence beneath me, receiving every message in the roar of the waves. On either side of me, the waves seem to peak in slow motion, so that I can plant my paddle deliberately, almost leisurely, exactly where it needs to be at any given second.

A hiss prompts me to glance over my right shoulder. Behind me, the wave parallel to the boat has begun to curl up and over, and the tunnel is racing along the wavetop toward me as it forms. I sprint towards the lee of the nearest reef, and with action-movie timing, slide into its shelter just as the tunnel’s jaw starts to close on my rudder. Fortunately, it’s a spent force once blunted by the rock, and only yaws me gently to the right. A quick draw stroke gets me back on track, and I slide gratefully into the smooth waters on the inside of the islands. Lying in my sleeping bag that night, I replay each euphoric moment, with the sound of waves crashing not far from my tent as the soundtrack. 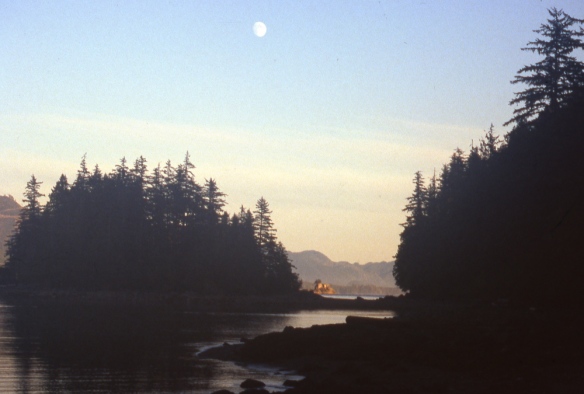 The next day, as if to show another facet of its character, the sea yields enough rockfish to feed both me and the other kayaker I’m sharing the island with. Cooking couldn’t be simpler: wrap the fillets in foil with butter and onion, and grill on campfire coals for a bit.

Early next morning, I set out on the five and a half mile crossing towards Crowther Channel. About half way along, fog comes down, reducing visibility to as little as a hundred feet in places. At times I’ve felt almost pretentious having a full-fledged marine compass mounted on my kayak’s bow and jotting down compass courses before setting out. This is not one of those times. I have three sets of closely spaced reefs to thread through. Even in clear weather, it’s an eerie experience to see swells transformed into breakers as they trip over submarine rocks, miles from any land. In fog, it’s much creepier, since you hear the low booming long before the breaking waves loom out of the mist. It feels like tiptoeing through a field of invisible dragons. Staying the course is an act of faith, as with no landmarks to take sights from or use as ranges, it’s impossible to accurately determine drift caused by currents. But eventually land emerges through the fog. Uncertain of exactly where I am, I pull ashore and wait for the fog to burn off. Once it does, I find I’m only about a half mile from where I expected to be. Not bad, all things considered. 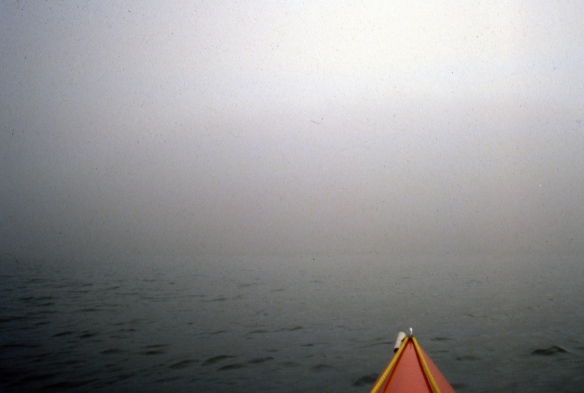 I set off down the channels towards Fair Harbour. The afternoon inflow wind allows me to fly my kite. A bit of a free ride is very welcome on what will be a long day on the water. And indeed, the moon is rising by the time I turn the final corner into the harbour. It creates a shimmering silver path in front of me on the last leg home.

Now if this were fiction, this is where the story would end: Moonlight on the sea, a slow fadeout, uplifting music, and roll credits. But it’s real life. So the tale ends on a different note. Actually, a whole series of them. By which I mean I could hear Fair Harbour long before I could see it in the dark. Loud, obnoxious rock fusilladed through the gloom. You know the kind: the sort where it sounds less as though the band members are playing their instruments, and more like they’re being repeatedly dropped on them from a great height.

As I pulled ashore, I could see the culprits. On a narrow strip of beach beside the dock, the box of a large rental truck was being loaded with multiple kayaks from a group trip that had obviously just ended. To encourage their labours, the merry band of half-wits were blasting the truck’s stereo full volume. I gritted my teeth, as did the fishermen whose boats were tied up there. One even wandered down the dock to shout something to Team Twit. I couldn’t make out the words of the response above the din, but the tone and body language seemed unmistakable: go have an intimate personal relationship with yourself.

But as I was securing my kayak to my car roof, karmic balance was restored to the universe. Loading complete, the screw-you crew fired up the engine and gunned for the upland. Or rather, tried to. The ramp and foreshore path were unpaved. And as they’d been loading the truck, the tide had been creeping in, saturating the sand beneath the tires. Under the pressure of the moving wheels, the soil liquified, and the tires spun in place as they sank to their rims. Much cursing ensued, followed by an attempt to rock the truck back and forth. This succeeded only in further entrenching the tires. Eventually, one of the bunch made his way to a small house across the way, which had an oversized pickup parked in the drive. Even with the stereo now turned off, I couldn’t hear the plea for a tow. But I could hear the response just fine. “Are you kidding me?” the householder bellowed, “Why would I f**k up the best show all summer?” He popped the cap off a beer and plopped into a lawn chair, shouting to the home’s other occupants to come out and grab front-row seats.

Unfortunately, I had a long way to go on the logging roads, so I couldn’t stay to see the final chapter. But by the time I pulled away, the truck’s exhaust pipe was already submerged and bubbling, and the tide still had several feet to rise, thanks to the full moon. Not quite the ending to my trip I had anticipated, but satisfying in its own way.

An important note: this trip happened more than a quarter of a century ago. Since then, awareness of the moral and legal rights of British Columbia’s First Nations to their unceded territories has vastly expanded, as have both their settled and pending land claims. Many of the sites described are no longer accessible for non-natives, or accessible only with the permission of their rightful owners, the Ka:’yu:’k’t’h’/Che:k:tles7et’h’ (sometimes simplified as Kyuquot/Cheklesath) First Nation. For the most up-to-date information on access, please visit: http://www.kyuquotbc.ca/. Another useful resource is BC Marine Trails.

The first part of this trip report is here.