The tent post-attack. Sorry for the shaky picture; I was still pretty shaky myself.

There is nothing quite like the experience of nearly being eaten to make you appreciate how fleeting your position atop the food chain is. In the summer of 1993, I became one of the lucky few to acquire this sort of insight.

Backcountry tourists, as opposed to those who live in the wilderness, seem to fall into two equally simple-minded groups. Those of the old school are convinced that behind every bush, a predator lurks expressly for them. They are barely able to stagger down trails under the burden of rifles and grenade launchers. Late-night forays to answer the call of nature are made perilous by the razor wire and minefields they have used to “secure” the camp perimeter. These folks have delusions about their own importance in the scheme of things.

Equally naive in their own sweet way, members of the other school skip down trails, strung out on alfalfa sprouts, and certain that the woodland critters will sense the purity and goodwill bursting from their little whole-wheat hearts, and love them for it. The beasties will love them, all right— for their nutritional content.

You may be attacked if you happen to fit a creature’s dietary needs, or if you appear to be threatening its young. Try not to take it personally; that’s just life in the wild. With the same lack of malice, forced to choose, I would rather kill than be killed. (I believe as much as anyone that predators are among nature’s most marvellous creations. I also believe the perfection of their bodies is best appreciated from the outside.) With this in mind, my travel partner Mark and I carried a shotgun on our kayak trip from Inuvik down the Mackenzie River to the Beaufort Sea.

The federal government publishes an earnest and unintentionally hilarious pamphlet on bear attacks. To respond correctly to an encounter, it solemnly counsels, first determine what species of bear you are confronted with. If it’s a black bear, do not bother climbing a tree, as it will bound up after you. Grizzlies, on the other paw, supposedly do not climb trees well. This is reassuring until you learn that a grizzly may weigh up to 600 kilograms. Any tree he cannot readily knock over, he can probably shake you from as though harvesting a ripe apple.

In any case, how does one tell the difference between species? It’s easy: simply take a good, close look at the claws. If they’re hooked, it’s probably a black bear; if they’re gently arched, it’s a grizz that’s got you…

Given that we were travelling above the Arctic Circle, neither black bears nor trees seemed likely encounters, so we acquired a second booklet from the government of the Northwest Territories. It was full of sensible advice, with one discouraging exception regarding polar bears.

Polar bears live in the North, and are a vital part of the traditional lifestyle. Guided bear hunting–and the subsequent skinning of both bears and Southern hunters–add thousands of badly needed dollars to the economies of northern hamlets. Due to their larger breeding populations, tourists are far more easily replaced than bears, and the Hunters’ and Trappers’ Cooperatives do not want bears killed frivolously. The brochure therefore requests that you not shoot at a bear unless it comes within ten metres.

We are talking about an animal that can move faster than a racehorse, with a skull that is armoured like a tank. I confess that we decided we would open fire at any bear within shotgun range and re-erect the tent within ten metres of any resulting casualties.

After kayaking down the Mackenzie River and along the edge of the Beaufort Sea, we arrived at a point about three hundred kilometres northeast of the teeming (with mosquitoes) hamlet of Tuktoyaktuk.

“Our” bear cunningly waited until we both lay asleep in our cozy tent at five o’clock one morning. My first hint of trouble was a violent cuff to my forehead, which spun me from my back onto my stomach. This was followed by a low growl in my ear and claws driven deep into my right shoulder. I reacted instinctively, mumbling something vague about being too tired and having to work in the morning, and curled tightly into a fetal position. When the unwelcome attentions persisted, I came to suspect that something was amiss. Strengthened in this conviction by the sight of the tent wall being hit-apparently by a battering ram, to the tune of hearty baritone bellows-I hastily quit my bed. Or rather, tried to.

For a realistic simulation of what it is like to extricate yourself from a mummy sleeping bag in such circumstances, you may want to have a friend dump you into a burlap sack, secure the drawstring with a granny knot, and wallop you with a baseball bat at random but frequent intervals while you try to get out. Then again, you may very well not want to do so. There’s no accounting for taste.

Mark, who had initially attributed the thumps and cries from my side of the tent to a nightmare on my part (which, in a sense, was correct), now sat up and rapidly revised his assessment: “A bear! It’s a bear!”

I had become convinced of this on my own, but it was reassuring to have him concur. I could be satisfied that I was not advocating hastily opening fire on what might only turn out to be a socially disadvantaged ground squirrel whose crack cocaine habit was a desperate cry for help.

The motion to shoot having been quickly debated, seconded, and passed, the only remaining logistical difficulty was locating the shotgun. It was buried beneath the fallen nylon fabric and aluminum poles, which were (unaccountably) failing to withstand the assault. 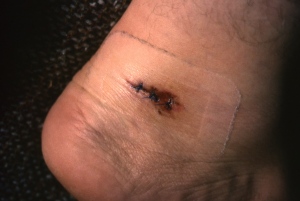 Compounding the problem, the bear–as is typical of all large, hairy bullies–refused to allow a time out for me to locate my glasses. In the end, I was forced to kick at the collapsed side of the tent in an effort to dig up the gun. Just as I succeeded and tossed the weapon to Mark, the bear seized my foot in its mouth. I spent an exhilarating few seconds being whipped back and forth on the end of my leg. I recommend the experience to anyone who’s ever wondered what it feels like to be the mouse the cat plays with.

The next item on the bear’s agenda seemed to be either to chew off my size nine-and-a-half foot as an appetizer or to drag me from the tent, where it would be easier to fillet me into McNuggets. Fortunately, my coolly improvised, two-tiered counterattack–which combined my overripe socks with eardrum-piercing shrieks–forced the bear to gag momentarily. I quickly pulled my leg out of range.

Mark had the gun ready by now, but prudently remembered that a non-lethal hit on a bear merely worsens its disposition. We could not see our attacker through the tent, so he fired a warning round at the roof, which he managed to hit with his very first shot.

Since I was momentarily indisposed, Mark was left with the unenviable task of sticking his head out through the top of the tent, not knowing if he was going to have his noggin knocked off for his trouble. Fortunately, Brother Bear had beat feet outta there.

In hindsight, the reason for the attack was almost certainly the food odour on our tent. I can hear the righteous wails arising from across the nation. Everybody knows you don’t eat in or near your tent in bear country. Everybody, Mark and I included, does know that.

However, even in the summer, a heat-leeching wind steals almost continually across the Arctic. The only sure way to rekindle the body’s inner fires after long, cold hours at sea in a kayak is by consuming hot food. And the only way to keep food hot long enough to do any good is to keep it out of the wind. And the only place out of the wind above the treeline is…in your tent. So call it a (badly) miscalculated risk.

One ironic aspect of all this one-sided shadow boxing is that we never actually saw our assailant well enough to figure out what sort of bear it was. Since that same inability to see undoubtedly prevented the bear from killing me, I won’t complain.

During the subsequent investigation, the Wildlife Department biologist expressed the opinion, based on the location and time of year, that it was probably a polar bear. If so, I am even luckier than I had imagined, as polar bears are one of the few animals that actively hunt humans.

Overall, we got off extraordinarily lightly. We did not have to kill one of nature’s noblest creations (thank Heaven for that—the paperwork is endless if one does). I bear (sorry about that) a very faint mark on my forehead, which I feel I can legitimately pass off as a duelling scar. My shoulder features claw marks that will require earnest and detailed explanation to any future inamorata, and the minor wound in my right foot doubles as a handy barometer. We look forward to resolving our dispute with the tent manufacturer over what constitutes non-warrantied “product abuse” any day now.

I can legit call this a dueling scar, right?

People naturally ask whether this experience has left me afraid to venture into the wilderness, or whether it has changed my backcountry habits. Certainly not. You may encounter me on a backcountry trail anytime soon. I’ll be the one in the stainless steel underwear.

This is the story that fostered my ongoing disillusion that I might be a writer. First published in Explore magazine in the 1990s, its reception encouraged me to perpetrate further drivel on an unsuspecting public. It’s also been anthologized in the Summit Studios book Mugged By A Moose, which can be purchased on Amazon and Chapters/Indigo. If you like tales of outdoor adventures gone wrong, this book, and the others in the series, are chock full of offerings from writers whose dry wit and sly turns of phrase will have you in stitches. But be warned: they also contain several stories by me. And if some strange masochism means you just can’t wait for those books to arrive before you get another hit of my attempts at humour, try here.