July 9, 2003
The shuttle driver from Smiling Otter dropped me off with my boat and gear at the north end of Slocan Lake at about 13:00 hours. The weather was lovely and sunny.

The first few hundred yards of paddling was past beautiful summer cottages. Beneath the emerald water, I saw what I’m speculating might be Asian Milfoil growing on the bottom – a corkscrewed shape, like a drill or auger. The branches of an evergreen freshly toppled off the bank vanished into the ghostly green depths of the lake. The water was startlingly clear; in the shallower areas, I could see the shadow of my kayak flitting across the lake bottom.

About an hour in, I stopped for a couple of pilot biscuits. As I ate, the slight headwind which had been running died out. I spotted a male Northern Pintail and had a Kingfisher follow me along the shoreline for miles – possibly escorting me to the boundaries of his territory.

As I passed each creek, I was refreshed by a river of cooler air, which cascaded down from the alpine following the same valleys as the water it rode above. Harrah for micro-climates! The paddling continued calm and idyllic.

Wragge Creek was busy with families and dogs. I carried on to Wee Sandy Creek, landing there about 16:00. Contrary to its name, it’s neither wee, nor a creek – it’s a young river. And it’s not sandy. On the plus side, to my surprise and delight, I have the place to myself so far. The Tortellini is cooking as I write this at 17:15, and will soon be drizzled in olive oil.

July 10, 2003
I originally woke up at 5, but with the sun not yet above the mountains on the east side of the lake, I dozed until 6. I packed away the tent in the kayak, and had a great breakfast of tinned hash and freeze-dried hash brown potatoes, then at 8:45 slung my pack on my back for my overnight side trip into the alpine and to Wee Sandy Lake.

Within a few hundred metres, I hit an unmarked fork in the trail. I guessed since the right side path led up at about a 45 degree angle, it would be the correct one, and so it proved.

As I’d heard rumors about, since BC Parks has begun to shift to private contractors instead of park employees, maintenance has suffered. There were many deadfall trees barricading the trail, with no centre section cut out of them. With my pack on, jumping the trunks wasn’t an option, so had there been any onlookers, I would have appeared to be a geriatric doing a very slow-motion hurdle race.

After a couple of hours, I came to the first log-and-cable bridge. Crossing it was a bit nerve-wracking since I don’t have either great balance or a great head for heights. I was not happy at the prospect of at least one, and probably several, more such high wire acts.

On the plus side, I was very pleased with how well all my winter and spring cardio bike riding was paying off: I definitely knew I was working, carrying a pack up 3,000 feet of elevation gain, but it was good, healthy sweat, not a pulsing forehead throb and gasp for breath. Pretty OK for a guy in his mid-forties.

Shortly after the first bridge, I came across a derelict cabin with the woodstove and enamel cookware still scattered in the ruins.

The trail now traversed some steep rock slides and gullies, overgrown with ankle high foliage. I found these quite spooky and disagreeable – it’s unclear where the trail lies, and having your foot placements partially or wholly blocked from view feels very insecure – especially when the exposure is a long, steep slope.

Traversing across a creek bed, I did slip off the path. To arrest my fall, I grabbed some of the same plants that were the cause of my problems as a handhold, thereby avoiding a ten foot fall into a steep creek. The close call rattled me pretty badly, so I stopped and did a little pressure breathing to calm myself down.

Once I’d gotten a grip, I could think logically. I entered my current location as a GPS waypoint* – I felt confident I could find my way back down to the lake from there. Then I set out. Within moments I was back in the reassuringly open forest, where it was much easier to spot the few-and-far-between yellow trail markers. By the time I came to the second log-and-cable bridge, I was jaunty again. The strategy I’d worked out for this bridge was a success: don’t dither and work yourself into a state. Unlock waist belt and sternum strap, and loosen shoulder straps so you can ditch the pack quickly if you do wind up in the water, then full speed ahead. I even felt confident enough to unpack my camera on the far side and take a couple of photos of myself on the bridge with the self-timer.

*My pocket GPS of this era did not have a built-in scrolling map. It only displayed grid references which you had to manually plot on paper maps. This meant the accuracy was limited by the scale of your paper chart and the skill of your plotting. In a situation where being ten feet off the trail meant you might miss it entirely, this mattered. 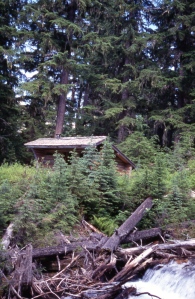 Since it was now about 14:00 hrs, I had lunch on the far side of the bridge (I’d been snacking as I went along, but could feel the need for a more substantial energy hit.) After plodding uphill for another hour, I reached the cabin at Iron Creek. What a beauty! I’d been prepared for a rotting lean-to, and there is indeed an older cabin matching that description here. But the new hiker’s shelter is wonderful – clean, cozy and well maintained.

After an hour’s rest, I set off for Wee Sandy Lake with only my camera gear and emergency bivy stuff in my pack – I wanted to move light and (comparatively) fast. I’d set 17:30 as my turn-around time to head back to the cabin, come what may. At 17:15 I was still plodding uphill, no lake in sight. But at exactly 17:30 I was on the shores of the lake. It was spectacular, and very special knowing I had it all to myself and that no power boat (indeed, perhaps no boat of any kind) had sullied these waters. All around me, plants and animals went about their business as they had for thousands of years, undisturbed by humans.

I lingered only half an hour, eating the second half of my supper as I gazed over the lake. Wanting to be sure of daylight to follow the trail and find my way back to the cabin, I set off at 18:00 hrs. Since it was downhill, it was slightly faster. I sighted the cabin at 19:10, just moments after the sun disappeared behind the peaks.

There was plenty of daylight left to wash my sweat-soaked clothes and hang them under the eaves to dry, then to wash myself in creek water so cold it almost gave me an ice cream headache. But very refreshing to rinse off all the salt and sunscreen, and to actually shiver for a bit after the prolonged heat of the day.

I’m writing this entry in my journal on the bench at the cabin front, looking forward to a cozy night in a weatherproof and bear and cougar resistant home.

I browsed through the cabin journal with entries from previous visitors. I was a bit annoyed to find an entry from a party who’d landed their float plane on Wee Sandy Lake, then hiked down to the cabin as a daytrip. They were either unaware or didn’t care that this area is off limits to aircraft for anything except emergency landings. At least it didn’t happen during my visit.

I dropped off to sleep on the bunk reading Richard Leakey’s The Origin Of Humankind, which I’m hugely enjoying.

July 11, 2003
I woke up at 5:15, dozed until 6, then had a granola breakfast and got underway back down to Slocan Lake at 7:35. As expected, my legs are a bit achy and sore after all yesterday’s uphill work, but they’re tolerable. Not that I have any choice about it! 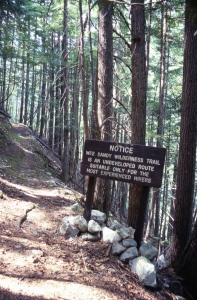 By 10:30, I’d passed all the serious obstacles, including the dreaded green groves of ferns, the gully (where I managed to slip twice today) and the outermost log bridge. At noon, I bonked completely, and so stopped for lunch near the sign warning that the trail is suitable for very experienced hikers only. Then I detoured out to the viewpoint to get pictures of Slocan Lake from above.

I got back to the beach shortly after 13:00. For hours, I’d been hiking down through steadily-increasing heat, brewed up by a one-two punch of the rising sun and the diminishing altitude. So just as I’d been planning, I ditched my pack, changed from hiking boots to sandals, and then waded into the lake fully clothed, thereby washing shorts, shirt and self simultaneously.

Feeling like I’d got my exercise for the day, I decided to camp at Wee Sandy Creek again tonight. During the afternoon, a couple from Nelson, Ralph and Teresa, and their young daughter canoed in to share the site. Teresa dropped over with some surplus salad, made with lettuce grown in their own garden; the crisp greens were very welcome in the hot summer evening.

Part 2 of this trip report is here.