Back in the day, I had a bombproof kayak roll. But gradually, I fell out of the habit of practising it. When I first abandoned whitewater and surf paddling in favour of exclusively ocean kayaking I kept it up. But over the years, I persuaded myself it wasn’t really essential for sea kayaking and probably wouldn’t work anyway with my sail on the boat. Besides, my brace worked fine (except when it didn’t.) Somewhere along the line, I convinced myself that age made it unlikely I could recapture my roll. 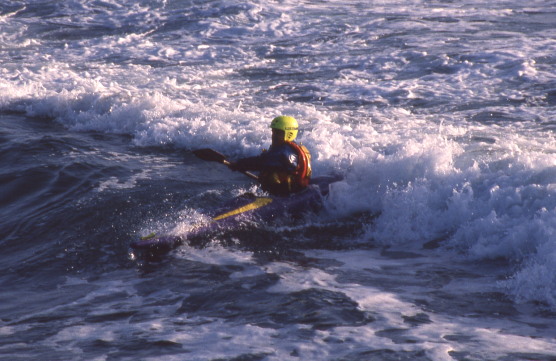 But this year, one of my personal and professional goals is to regain my roll. And to do it like a girl.

When I’d been a regular roller and watched (and sometimes helped) other paddlers learning the technique,  I’d been struck by the different ways men and women approached the roll.

Guys tended to want the basics explained, to see a demo or two, then to have at it, using their greater upper body strength to lever the boat back up.

Women wanted to watch a roll over and over, and then to break it right down, quizzing me about why I did this or that (including a lot of things I hadn’t even been aware I’d been doing.) They sometimes took longer to make their first successful roll, but when it came, it was built on a solid foundation of balance and timing, not brute strength.

Naturally, there are exceptions to this stereotype in both directions: There are female paddlers who can crank more torque than a tugboat. And males whose relaxed finesse transforms rolling into aquatic ballet, with the kayak as dance partner. 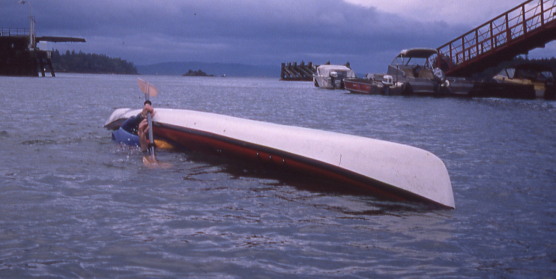 The fast-and-hard approach to rolling I saw so much of in those days was probably because we were mostly paddling rivers. There’s a lot to be said for not loitering upside down in whitewater: swift currents can suck you into an unforgiving feature, or woodpecker your head along riverbed cobbles.

But with the exception of unrelentingly technical rivers, in whitewater you can generally eddy out after a roll or two to catch your breath. Not so in sea kayaking. If you’re ambushed by shifting weather or changing tides, the only refuge may lie on the far side of endless acres of curling swells – seas that require you to roll. And roll again. And again. Which is why I aspire to roll like a girl: rolls based on brute force quickly exhaust you; rolls based on balance and skill can be sustained almost indefinitely.

So how’d my first attempt at relearning go? I scored near misses on my first two tries, then had to wet exit. After that, I pulled off three successful rolls in a row. Not bad for a skill I hadn’t exercised in years. And great to know the basic muscle memory endures. Unfortunately, the water was too murky to see my underwater set-up on this video (I’d been filming so I could analyze my technique.) But I’ll be out there again soon, solo or with knowledgeable friends to learn from. Appropriately, I’ll be wearing a tight black skirt.