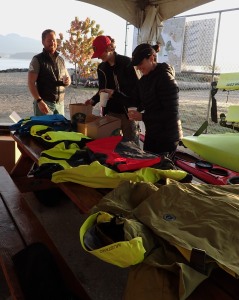 Coffee with a gear buffet

There are a few perks to being a sea kayak Instructor/Guide. Like being invited to join a focus group run by Mustang Survival. In Canada, Mustang has long been a go-to brand for recreational boaters, commercial fishers and racing sailors. But, with the exception of a manual inflation vest that’s popular with paddlers who can’t find a foam PFD that fits their body shape (or who just find foam PFDs too warm), Mustang’s products haven’t been top-of-mind in the sea kayaking market. They’re gunning to change that. Which is why I found myself, along with three fellow instructors, doing dawn patrol on a crisp, sunny fall morning.

We started with coffee and an introduction to the test products given by our hosts from Mustang’s Design Department. Then it was time to get suited and booted and hit the water—literally.

One of the products we were trying was a new production PFD, the Khimera™. This hybrid foam/inflatable aims to offer the best of both worlds: a low profile for ease of movement when paddling or swimming, with the option to deploy an extra dozen pounds of buoyancy should you find yourself overboard in gnarly water.

Once you’ve fired off the CO2 cartridge and inflated the bladder, you gain a very buxom profile, regardless of your gender. We found that when swimming onto the back of the kayak during a re-entry, that big bust can make it hard to “press the deck” and keep your centre of gravity low and steady. That said, you can always bleed off gas and volume via the oral inflation tube, and top up the bladder again by mouth if you need to. And if you have the additional buoyancy of a wetsuit or drysuit, you might never feel the need to activate the CO2 in the first place.

The Khimera PFD. Note the aluminum handle for firing the inflation cartridge.

The other possible snag is the aluminum pull handle for firing the cartridge. After use, it dangles at the end of a lanyard several inches long, where Murphy’s Law predicts it could catch under deck lines during a re-entry. We suggested to the design team that adding a bit of bungi cord could let the handle self-retract after being pullled.

I do like the idea of using the oral inflation tube to fine-tune the vest’s buoyancy to whatever situation you find yourself in. And being able to add all that extra flotation instantly might be very welcome if you found yourself separated from your kayak in the surf zone, and were facing a long swim to the beach through aerated and unsupportive water.

The other product of particular interest to me was an in-development drysuit, provisionally called The Hudson. (I feel rather proprietary about this one, since I tested an earlier prototype of it about a year ago.) Two features really make it stand out from other paddling drysuits: the seals and the suspenders.

To mangle a metaphor, a drysuit’s wrists are its Achilles heels. Latex wrist gaskets are fragile, semi-consumable parts that need replacing several times over the life of most drysuits. They have an awkward habit of tearing at the worst possible times (like in the middle of a multi-day tour).  Mustang has side-stepped this problem by going with neoprene wrist seals. I’ve been a huge fan of neoprene seals since my diving days (so much so that I once paid a dive shop to retro-fit neoprene seals to a paddling drysuit.) They’re durable and stay watertight at depths no sea kayaker will ever reach alive.

Latex neck seals share all the weaknesses of latex wrist seals, plus they can be—sorry about this—a pain in the neck. Seriously, try wearing one day after day on tour. You’ll develop a rash that makes it look like you were guillotined and then had your head glued back on.*

Mustang has gone with an adjustable neck seal made with a light, supple and stretchy rubberized fabric. It adjusts with a bungi drawcord.

I popped off several rolls with the neck seal cinched. Back on shore, I found a bit of seepage had slightly dampened the front of my underlayer top. So for kayak surfing, roll practice or teaching courses (where I know I’ll be spending several hours out of the boat and in the water), I might stick to latex neck seals. But it’s also possible I simply hadn’t cinched the neck tight enough, as I don’t remember leakage after multiple rolls and wet exits when testing the earlier suit.

I’m pumped about the potential of this neck seal for touring. Aside from the greater durability compared to a latex seal, it helps with one the great challenges of any all-day paddle: the wildly varying conditions. Having the option to vent and reduce the “boil-in-bag” effect when it’s calm and warm and sunny or to batten up tight when the rain falls and the waves rise is tremendously attractive. (Mustang have promised me a loaner suit for my next overnighter so I can test this theory.)

The Hudson’s removable internal suspenders are soft and stretchy. I’m a big suspenders fan because as a highly-evolved marine mammal, I have a layer of insulating blubber around my belly. (That is, I’m pretty pear-shaped.) So I often have to go up a size to get sufficient waist space, resulting in a suit that’s a bit too long. Low-riding waistbands and knee-height crotches may be cool for gangsta wannabes, but they suck for sea kayakers walking on the beach or re-boarding after a wet exit. The suspenders prevent this fashion and function faux-pas. They’re also great for that half-dressed, pre-launch mode where you’ve put on the suit but not pulled the top on and over. No need to do that awkward suit-arms-tied-in-front-of-your-waist thing.

Mustang is hoping to market The Hudson to sailors as well as sea kayakers, and they want to keep the price attractive. So it won’t have the sprayskirt tunnel found on many kayak-specific dry suits. Which segues us into the fact that Mustang is not a sea kayak specialist company, unlike some of the current major players in the clothing/PFD market. But they are bringing to the table decades of experience in manufacturing for the demanding marine environment, together with a serious commitment to learning what sea kayakers need and want (hence the focus group). Hopefully they can disrupt things in a creative way that results in innovative products for sea kayakers. I’ll be watching—and wearing—their products with interest.

*There is a partial solution for this rubber rub. Regular application of a “personal lubricant” around the neck contact area will reduce chaffing. But take two important precautions: 1. Be sure your lube is latex safe, so it doesn’t melt the neck seal. 2. Explain to any platonic paddling partners why you’re slipping a tube o’ lube into your deck bag, lest they worry that you’re trying to take your relationship with them in a new direction.

Disclosure: In return for my participation in this focus group, I received a couple of small gear items and a one-time discount coupon for Mustang products. Writing this blog post was not part of the requirement: I’m just a gear geek and I thought my fellow tech weenies would like it.

3 thoughts on “Fit To Be Tried: New Sea Kayaking Gear”