A routine inspection of my paddling drysuit had revealed a pair of notches in the latex neck seal. Stress risers like these will propagate under tension into full tears  ̶  usually at the most awkward moment possible, like the first day of a multi-week tour. So it was off with the old and on with the new. 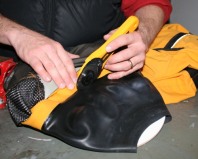 The first step was cutting away all of the damaged seal except for the border bonded to the drysuit fabric. I used a fabric cutting wheel to achieve a clean edge (EMT shears would also work, and they have no stabby points to poke unwanted holes.)
Because neck and wrist gaskets are semi-consumable parts that need replacement several times over the life of a quality drysuit, I’ve invested in Kokotat’s neck replacement tool. It makes it much simpler to hold the neck area flat and to apply an even, constant pressure while the new seal is drying.

After applying a ring of double-sided tape around the tool’s base plate, I stuck down the fabric outer neck.
Next, I used sandpaper and rubbing alcohol to roughen and clean the remaining strip of rubber so it would bond strongly to the replacement gasket. I did the same with the corresponding area on the new gasket. 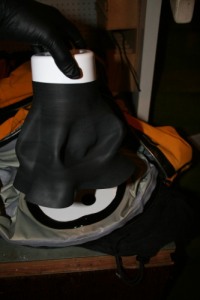 I spread Aqua-Seal over the strip of old rubber. After slipping the new neck gasket on the “neck gasket shape retainer form” (AKA an oversized yogurt container), I smoothed its edge onto the sticky strip of rubber. After that it, it was simply a matter of clamping both half-circle boards into place. 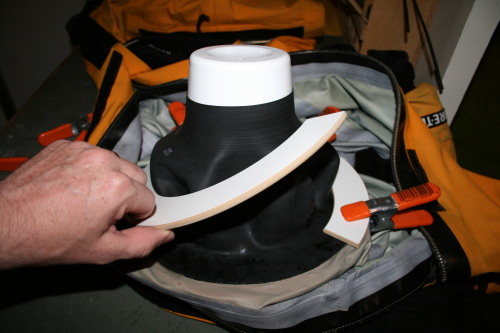 24 hours later the new seal had bonded and my drysuit was once again watertight. I celebrated with a daytrip on English Bay.