My Personal Transport Team (AKA my long suffering wife) dropped me with my boat and gear at Deep Cove about 14:00 hours on December 30th. I’d been waiting for a window of clear weather; the temperatures are lower under cloudless skies, but it’s easier to stay safely warm in dry cold than in icy rain. That’s true both in the kayak and in camp.

Thanks to my late afternoon launch, the world was awash in golden pre-dusk light as I approached Indian Arm’s Twin Islands, my home for the night.

As I portaged my gear up to my selected tent platform, I discovered a pair of canoeists who were also camping. They’d set up in a gully that looked out on the northwest side of the island while I was camping in the clearing at the island’s center. That gave us all plenty of privacy; we couldn’t even see one another’s tents.

After supper, I ventured back down to the dock, hoping to spot the Northern Lights that had been predicted. By ten o’clock, when the cold outflow wind made the call of my warm sleeping bag irresistible, they hadn’t put in much of an appearance. But I did get a good shot of the Big Dipper pointing at Polaris. 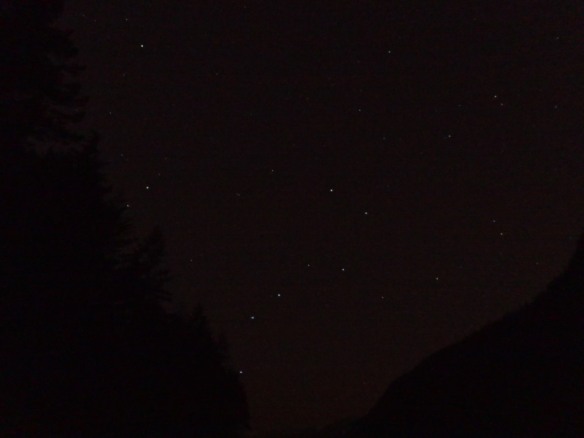 In the frost of 4 AM, I ventured out for a second look and was rewarded with a faint glow on the northern horizon. Not the spectacular light shows I’ve seen further north, but still worth seeing. 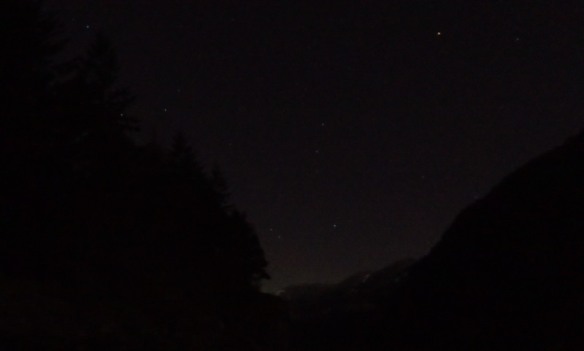 After this nocturnal excursion, I slept in until 10 AM, late enough for the sun to peep over the eastern hills, and bathe me in its warmth as I ate breakfast. (Deliciously greasy tinned hash and heavily buttered muffins — when you’re operating in cold conditions, Fat Is Where It’s At, food-wise.)

As I was preparing to push off from the dock, an entire fleet of canoes and kayaks was pulling in. My timing had been excellent; the island would be full for New Year’ Eve. 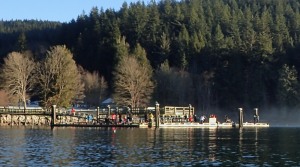 Favourable currents gave me a gentle boost south past Turtle Head and Admiralty Point. Day trippers flung their crab traps off the Belcarra Park dock as I drifted past.

The Personal Transport Team met me right on schedule for the extraction at Barnet Marine Park. Dusk fell just as I finished lashing the kayak to the roof racks. We set course for home, where a hot shower and cold champagne awaited.